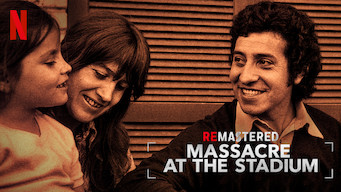 The shocking murder of singer Victor Jara in 1973 turned him into a powerful symbol of Chile’s struggle. Decades later, a quest for justice unfolds. ReMastered: Massacre at the Stadium featuring Víctor Jara, Joan Jara, Pascale Bonnefoy, and Joyce Horman is streaming on Netflix starting Friday, January 11, 2019. The movie is directed by B.J. Perlmutt.

ReMastered: Massacre at the Stadium is a documentary movie with a N/A score on Rotten Tomatoes and IMDb audience rating of 7.8 (104 votes).

Here is what parents to know – ReMastered: Massacre at the Stadium parental rating is TV-MA. A TV-MA content rating means that material is unsuitable for children under 17. The program is specifically designed to be viewed by adults. This program may contain one or more of the following: crude indecent language (L), explicit sexual activity (S), or graphic violence (V). R and TV-MA are about equivalent ratings content-wise.

Watch ReMastered: Massacre at the Stadium trailer below to get you pumped for the release.

You can view the Netflix’s ReMastered: Massacre at the Stadium official page. Be sure to check out all of the new releases coming to Netflix in January 2019.