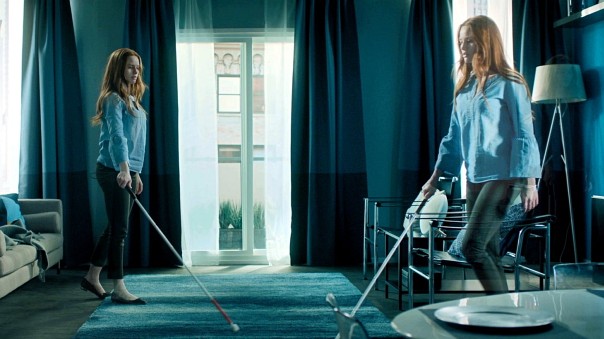 Sightless is a Netflix Original drama directed by Cooper Karl. This movie was first released on Wednesday, January 20, 2021, and currently has a 5.5 rating on IMDb.

Is Sightless on Netflix?

Yes, Sightless is on Netflix. You can stream Sightless on Netflix starting Wednesday, January 20, 2021, at 12 AM PT / 3 AM ET. Discover all movies and series released on January 20th and find out what’s new on Netflix in January 2021.

Below you can view Sightless plot, streaming info, reviews, and much more about the movie.

After an attack renders her blind, Ellen Ashland withdraws from the world to recover. But soon she plunges into paranoia, unable to convince anyone that her assailant has returned to terrorize her by hiding in plain sight.

Sightless is a Netflix Original movie released in 2020. Netflix uses the term "original" to present movies and series that are exclusive to Netflix - cannot be watched anywhere else. About 85% of all new spending on content goes toward original programming. You can view the official website and Sightless on Netflix for more information.

Sightless is a drama, thriller movie with a N/A score on Rotten Tomatoes and IMDb audience rating of ( votes).

Here is what parents need to know – Sightless parental rating is NR. Not Rated (NR) or Unrated (UR) is often used when a film or a TV show has not been submitted to the MPAA for a rating. Unrated movies and TV series should be treated at least as R / TV-MA as it is often that rating or worse.

Be sure to check out everything new on Netflix in January 2021. You can also view Sightless poster on the next page ⏭️.