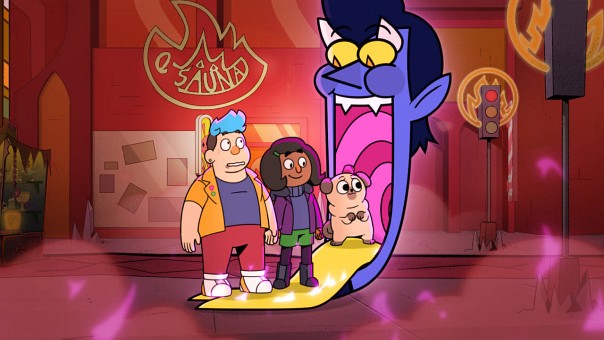 Dead End: Paranormal Park is a Netflix Original animation series created by Hamish Steele. This series was released on Thursday, October 13, 2022, and currently has a 6.3 rating on IMDb.

Below you can view Dead End: Paranormal Park plot, streaming info, reviews, and more about the series.

Two teens and a talking pug team up to battle demons at a haunted theme park and maybe even save the world from a supernatural apocalypse.

Dead End: Paranormal Park is a Netflix Original series released in 2022. Netflix uses the term "original" to present movies and series that are exclusive to Netflix - cannot be watched anywhere else. About 85% of all new spending on content goes toward original programming. You can view the official website and Dead End: Paranormal Park on Netflix for more information.

Dead End: Paranormal Park is a animation series with a N/A score on Rotten Tomatoes and IMDb audience rating of 6.8 (2,242 votes).

Here is what parents need to know – Dead End: Paranormal Park parental rating is TV-Y7. TV-Y7 indicates that programming is designed for children ages 7 and older. An additional rating, TV-Y7-FV, is used to indicate that a program contains “fantasy violence” that may be more intense or combative than other TV-Y7 programs.

Be sure to check out everything new on Netflix in October 2022. You can also view Dead End: Paranormal Park poster on the next page ⏭️.