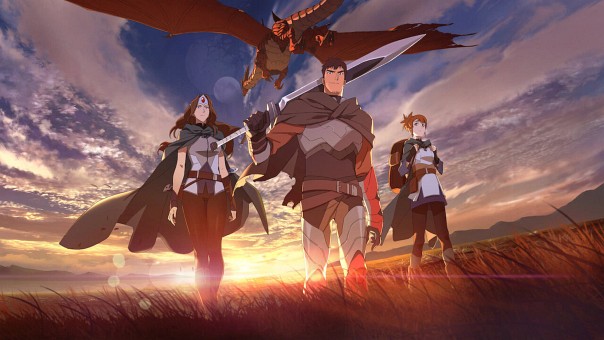 Dota: Dragon’s Blood is a Netflix Original animation series created by Ashley Edward Miller. This series will be released on Thursday, August 11, 2022, and currently has a 7.8 rating on IMDb.

Is Dota: Dragon’s Blood on Netflix?

Not yet, Dota: Dragon's Blood will be released shortly on Netflix. You can watch Dota: Dragon’s Blood starting Thursday, August 11, 2022, at 12 AM PT / 3 AM ET. Discover all movies and series released on August 11th and check out what’s new on Netflix in August 2022.

Below you can view Dota: Dragon’s Blood plot, streaming info, reviews, and more about the series.

After encounters with a dragon and a princess on her own mission, a Dragon Knight becomes embroiled in events larger than he could have ever imagined.

Dota: Dragon’s Blood is a Netflix Original series released in 2021. Netflix uses the term "original" to present movies and series that are exclusive to Netflix - cannot be watched anywhere else. About 85% of all new spending on content goes toward original programming. You can view the official website and Dota: Dragon’s Blood on Netflix for more information.

Dota: Dragon’s Blood is a animation series with a N/A score on Rotten Tomatoes and IMDb audience rating of 7.8 (17,738 votes).

Here is what parents need to know – Dota: Dragon’s Blood parental rating is TV-MA. A TV-MA content rating means that material is unsuitable for children under 17. The program is specifically designed to be viewed by adults. This program may contain one or more of the following: crude indecent language (L), explicit sexual activity (S), or graphic violence (V). R and TV-MA are about equivalent ratings content-wise.

Don't forget to check out what's coming to Netflix in August 2022. You can also view Dota: Dragon’s Blood poster on the next page ⏭️.