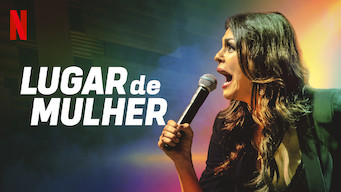 Four comedians from Brazil riff on sexuality, politics, religion and motherhood – and set out to prove a woman’s place is anywhere she wants it to be. Lugar de Mulher featuring Bruna Louise, Micheli Machado, and Cintia Rosini is streaming on Netflix starting Thursday, November 28, 2019. The tv show is directed by Fabio Ock.

Lugar de Mulher is a comedy tv show with a N/A score on Rotten Tomatoes and IMDb audience rating of 4.2 (41 votes).

Here is what parents to know – Lugar de Mulher parental rating is TV-MA. A TV-MA content rating means that material is unsuitable for children under 17. The program is specifically designed to be viewed by adults. This program may contain one or more of the following: crude indecent language (L), explicit sexual activity (S), or graphic violence (V). R and TV-MA are about equivalent ratings content-wise.

Watch Lugar de Mulher trailer below to get you excited for the release.

You can view the Netflix’s Lugar de Mulher official page. Be sure to check out all of the new releases coming to Netflix in November 2019.