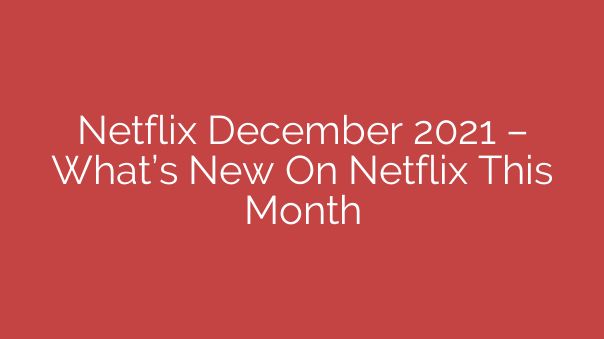 A new month means new titles are arriving on Netflix. The streaming service regularly announces new movies and TV shows coming to the platform, and December is no different. Netflix is preparing to premiere a bunch of new movies and TV shows, with some titles dropping on December 1, but others will gradually premiere throughout the month. There are over 100 releases this month.

December is bringing a new crop of shows and movies to binge, with some big names behind them. Joining this month’s lineup of excellent releases include , , and .

Here is a comprehensive look at what’s coming to Netflix in the United States throughout December 2021. We’ll walk you through every new movie and TV series currently scheduled to premiere throughout the month.

Please note, there may be more on the way. We will continue to update this page with the new releases as dates tend to change throughout the month.

What’s New on Netflix in December:

Note: Release dates may occasionally change without any notice.

If you didn't catch what came to Netflix last month everything new on Netflix in November 2021.