The 6 Best New Movies on Netflix in September 2022 on Netflix: Release Date & Details 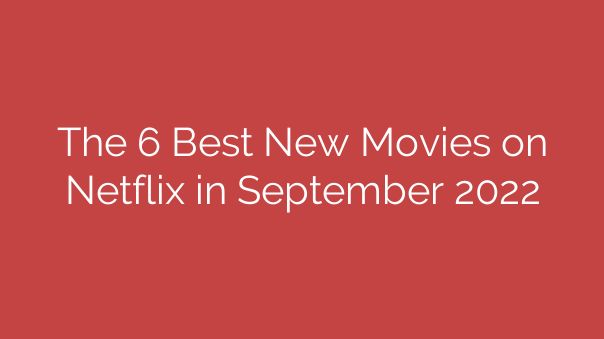 September has come, which means Halloween is just two months away, and we are all bracing ourselves for an assault of scary entertainment. As a prelude to the horror to come, Netflix is releasing two new original blood-soaked thrillers this month. Nonetheless, September has something for everyone, including a new rom-com starring Tom Hopper, a trilogy of flicks aimed at the family’s youngest members, and the much-anticipated Marilyn Monroe biopic. Let’s take a look at the seven finest new original movies coming to Netflix this September to help you plan your schedule and navigate the ever-changing streaming landscape.

Love in the Villa (September 1)

While some of us can’t wait for Halloween and the influx of horror films that come with it, Netflix is kicking off September with a treat for romance fans. Love in the Villa, starring Tom Hopper from The Umbrella Academy and Kat Graham from The Vampire Diaries, follows a woman (Graham) who is dumped by her boyfriend after planning a Shakespeare-themed vacation in Italy that she now has to enjoy alone. Her first thought is that she can at least have some alone time to process the breakup. That is if she didn’t have to share her villa with a complete stranger (Hopper), who had booked the same luxurious location for his vacation. While Love in the Villa does not reinvent the room-com formula, there is plenty to enjoy here. This September Netflix original is hard not to fall in love with. The setting is beautiful, the characters are sweet, and there are hints of Shakespeare throughout.

To cap off the month, Netflix has cast Ana de Armas as pop culture icon Marilyn Monroe. Blonde, based on Joyce Carol Oates’ popular historical novel, chronicles Monroe’s rise to stardom and how the pressure to remain a sex symbol damaged her mental health. Monroe had a successful career as an actress, singer, and model in the 1940s and 1950s. However, behind her huge smile and seductive glance was a person who was under pressure to act the way everyone expected her to, which finally led to her death by overdose, which was ruled as a potential suicide. By delving into Monroe’s life, the biography hopes to demonstrate how the film industry consistently objectsifies women and links their worth with their attractiveness. Blonde may be the most anticipated Netflix original picture to be released in September 2022, and it should be on everyone’s radar.

End of the Road (September 9)

End of the Road stars Queen Latifah in a film about two of America’s most enduring traditions: road trips and serial murderers. In End of the Road, Latifah is a widow who chooses to pack her children and brother into a car and journey across America in search of a brighter future. Unfortunately, after they become the unfortunate witnesses to a murder, they will be hunted by a killer who threatens to take down the entire family. With no one else to care for them, the family must join together to fight off their pursuers in the hopes of reaching their goal safely. According to the debut trailer, which promises a thriller packed with vehicle chases and nerve-wracking scenes, End of the Road is a wonderful warm-up for the big Halloween race.

What could be more thrilling than forbidden love? A Jazzman’s Blues tells the story of a young couple (Joshua Boone and Solea Pfeiffer) who fall in love as terrible social forces strive to keep them apart. With a plot that spans 40 years, the film depicts how two lovers are separated by family yet never cease caring for each other, no matter how far apart life takes them. In addition to being an obvious tearjerker, A Jazzman’s Blues promises to investigate the obstacles black men must overcome in order to be accepted as citizens, particularly in America during the middle of the twentieth century. A Jazzman’s Blues is also packed with amazing music, demonstrating how art can be a powerful instrument for expressing emotions.

Do Revenge, a thrilling thriller starring Camila Mendes and Maya Hawke as two unexpected allies who band together to crush their foes, will be released on Netflix in September. Mendes plays Drea in the film, who is publicly humiliated after her ex-boyfriend (Austin Abrams) posts their sex tape online. Eleanor (Hawke) is out for vengeance on Carissa (Ava Capri), who propagated a false rumor about her being a predator who forces girls to kiss her. Drea and Eleanor are united in their hate for the individuals who have hurt them. Their strategy, however, has the potential to backfire and turn them into murderers. That is yet another pre-Halloween treat for you!

Lou, the third thriller of the month, is another story about women joining together in the face of danger. Jurnee Smollett plays a mother who witnesses her child being kidnapped and chooses to pursue the man who kidnapped her daughter. To guarantee the kidnapper gets what he deserves, the mother will seek assistance from her reclusive neighbor (Allison Janney). The woman, however, is too well-equipped to pursue the kidnapper, which raises some doubts about her past, giving a wonderful depth of mystery to the action-thriller. Lou, which will come out on Netflix in September 2022, has a great cast and well-choreographed action scenes.